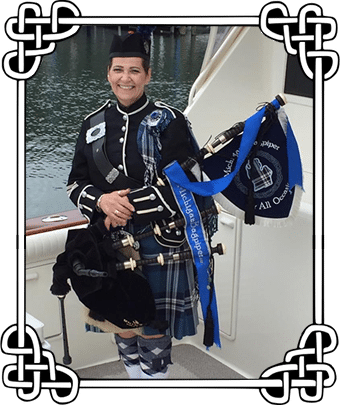 Michigan Bagpiper For All Occasions

The Michigan Bagpiper from Troy- Will travel up to 200 miles or more. Will travel for destination weddings.

Over 40 Years of experience

Kim resides in Troy, Michigan with her husband, Jay.  Together they raised their 6 beautiful children and currently enjoy being grandparents to 4 awesome grandchildren. She has always loved music and has enjoyed playing the guitar and piano, as well as singing and performing. She holds a minor in music from Oakland University.

As a young teenager, Kim began taking bagpipe lessons from Pipe Major William O’Donnell. Kim is now the Pipe Sargent and  band manager, as well as one of the founding members of the brand new competition pipe band- Motor City Pipes & Drums.

Kim’s interest in her Scottish heritage (Clan Montgomery and Clan Johnston) has inspired her to pair her musical talent with her “love for all things Scottish” to create a unique and entertaining Scottish program. This program includes a musical performance and informational sharing about Scottish traditions, folklore, history behind the songs, and an explanation of the traditional bagpiper uniform. She often shares this program at parties, schools and libraries.

Some of Kim’s favorite events as a professional bagpiper in Michigan include: opening for Rod Stewart concerts and opening for the premier of the movie “Our Vietnam Generation” at the Fox Theater. Kim also performed at: the ceremony for the Moving Wall when it visited Hamburg, Michigan, multiple Relay for Life events across metro-Detroit, weddings in the MGM Grand Hotel and Detroit Yacht Club, the Oakland University ethnic program, Bacardi/Dewar’s corporate events, and yearly St. Patrick’s Day events with local beer distributors.

In 2017, Kim was chosen and honored to become the Bowling Green State University bagpiper.  She pipes for their 6 yearly commencements, and proudly wears the BGSU recently designed, beautiful tartan kilt- along with the full Highland Regalia.

Not many people are able to craft a hobby that they love into a full-time, successful business. Kim is the most popular piper in Michigan and Ohio, with over 40 years of experience as a competition grade bagpiper.  Along with her solo piping for events, Kim also shares her enjoyable and entertaining Scottish program at schools, libraries, corporate events, shows, senior centers, assisted living facilities.